2018 was marked by a full-fledged entry into the international market. According to the agreements concluded earlier, after European certification for manufactured equipment, contracts, IPEC began supplying equipment outside of Russia. Contractual obligations were fulfilled for large industrial enterprises in Estonia, Switzerland and Israel. 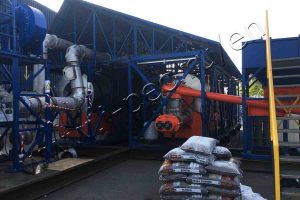 The development of processing technologies for other types of raw materials (waste) goes along with the development of new markets. For the first time, the processing of shredded waste from automobile production (ASR) and electronic scrap (in particular, printed circuit boards containing precious metals) was tested and introduced. In parallel, the process equipment modernization was launched in order to increase productivity and energy efficiency. TDP-2 plant equipped with additional reactors, each of which fulfills its purpose, were tested and implemented. Similar complexes successfully operate at oil production facilities of Oil and Gas Company SLAVNEFT. Pilot runs of the TDP-2-200M in combination with a power plant based on the Capstone C65 microturbine were completed, which gave impetus to a new direction – autonomous generation of electricity from processed products.

2019 – the range of waste processed at TDP-2 plants was replenished with sludge of sewage treatment plants. This type of waste required a rethinking of the processing technology. The reactor was split up into zones (drying zone – pyrolysis zone). IPEC obtained a patent for equipment and technologies in the territories of the countries of the Eurasian Union, where continuous pyrolysis is recognized as innovative. The leaders of the oil industry (ROSNEFT, Gazprom Neft) equip the fields under development with TDP-2 complexes that supports the switch to the advanced technologies of pitless drilling recommended by the Government of the Russian Federation.