What do we know about plastic waste accumulation and disposal? Facts and figures

In order to promise civilization all kinds of painful destruction, it is not necessary today to look into the Book of Revelation. A simple plastic bag hand with a PET bottle can do that. After all, in the world ocean by 2025, which is 5 years away, a second according to historical concepts, there will be 3 ton of plastic on every ton of fish – it is 600 bottles for every 10 kg of fish. An island in the Pacific Ocean, made up entirely of plastic waste, covers an area of about three France. And don’t think the plastic waste in it only floats on the surface: gradually decomposing, up to 70% of it falls to the bottom, gets stuck in the depths and it is absolutely impossible to evaluate how much the Pacific Ocean is lit in this vast area. Estimates range from 5 to 50 trillion tons – 10 times. (according to Greenpeace.

Plastics are an amazing group of materials with a variety of properties that have long served people. The invention of the first artificial material, celluloid, dates back to 1855. The second breakthrough was bakelite, invented in 1907 by Leo Bakeland. Since then, plastic has penetrated into absolutely all aspects of human life and has become absolutely indispensable. And, as usual, he slowly began to dictate its terms. Today, plastic takes up 8% of all produced oil, half of which is used for production and half for recycling.

Waste plastic, which amount increases at the rate of rolling snowball, is poorly recyclable: for example, only 7% of plastic packaging is recycled using different technologies. Although, if we analyze these figures, we find that the EU, for example, sends such waste to low-income countries and considers it recycled, while the real fate of this waste is simply impossible to be traced. The champion in plastic recycling is Taiwan, where the recycling rate of plastic waste reaches 55%.

And what’s for Russia? Russia faced the problem of plastic waste recycling much later than Europe: in the Soviet Union paper was used as packaging material much more often than plastic, and its disposal of was quite well worked out. There was neither legal framework, no technology, or even interest in the problem of plastic waste recycling. Only at the end of the XX century this problem started to be discussed with regard to the world experience. In spite of the fact that according to the Solid Waste Journal plastic waste makes only 6% of the total amount of solid municipal waste, it is a special type of waste requiring different approaches by type and by region of formation. Plastics disposal is a problem, mainly for two reasons: the diversity and complexity of the chemical composition and the long period of waste decay. 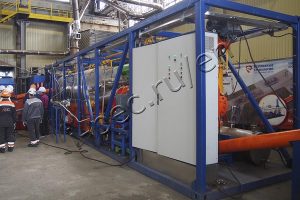 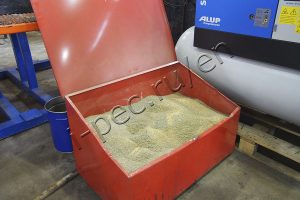 Types of plastic: which can be recycled? What do triangles with numbers mean?

Plastic processing codes – specialized designations of the material from which the product is made. Labelling, consisting of identifiers in the form of numbers and letters, significantly facilitates the process of sorting plastic waste and its subsequent processing. The way of waste polymer treatment is determined depending on its physical and chemical characteristics

The main plastic waste management methods can be divided into 4 groups:

The mechanical method – granulation. This way one can process waste film, polycarbonate, low-pressure polyethylene, polystyrene and polystyrene foam, polyamide and some others. The method consists of heating, passing through the extruder, pelletizing and cooling. The pellets can then be reused in the production of plastic goods. The disadvantage of this method is that only lower quality plastic products can be produced from recycled materials.

Chemical processing (recycling) involves the use of toxic solvents, which also make “re-creation” of plastic of original quality impossible. In addition, any chemical process is critically dependent on the homogeneity of raw materials, which is difficult to achieve in regard of waste. Sorting facilities are needed.

The advantages and disadvantages of such a method as burial are somewhat inappropriate even to discuss. This method of the day before yesterday, unfortunately, is still widespread today due to its relative cheapness for the present, but in the near future it will play out much worse dangers than other methods.

Thermal methods, divided into incineration and pyrolysis, are also widely used for plastics recycling. The advantage of incineration is in its “omnivores” and reduction of the initial volume of waste, especially for plastics with a considerable calorific value (of course, the calorific value of different types of plastic differs drastically). With a modern, high-quality gas cleaning system, incineration is still widely used today, for example, Germany incinerates up to 60 percent of its plastic waste. A surge of plastics incineration was observed between 2000 and 2016 in Europe, where the amount of plastics burned increased by 61%. In China, there are 231 large incineration plants and, accordingly, the share of incineration is also high. However, a demeaning waste of a sufficiently valuable secondary resource is unacceptable today.

Pyrolysis implies heating raw materials in the absence of oxygen and decomposing polymer chains without their oxidation. It is a rather promising method, which affects the environment to a less extent than incineration or chemical recycling do, but it has one Achilles heel – low productivity. Almost all pyrolysis technologies available on the modern market still have a periodic or semi-continuous principle of operation, which is associated with the difficulty of sealing the process. However, new and improved technologies are being actively developed in this area, which will make pyrolysis safer and more productive. 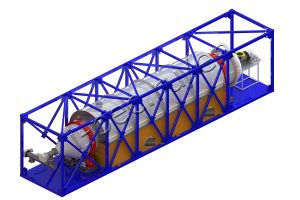 The plastic waste from the feeding container is fed to the shredder and then to the extruder, where it is heated and melted to a paste-like state. The raw material is then fed into the reactor, which is heated by pyrolysis gas burners generated during the reaction. In the reactor, due to the rotation of the furnace, the raw materials are evenly distributed on the walls and decomposed in the absence of oxygen. Then the steam-gas mixture passes through the pyrolysis gas filter, where it is cleaned of heavy components and mechanical impurities (ash) and enters the catalytic column, which prevents the formation of paraffins.  After steam-gas mixture it is fed into gas-liquid separator, where it is separated into liquid and gas phases. Liquid – pyrolysis fuel – is discharged into finished product storage tank. The pyrolysis gas is fed to the burners through a gas drying column, where the residual water vapor is separated, through a filter and a gas compressor.

Dry carbon residue is continuously removed from the reactor by means of automatic ash removal system to the ash collecting hopper.

The flue gases from the furnace, which do not contain any harmful impurities, are extracted by the smoke extractor into the chimney and released into the atmosphere. If the temperature of the flue gases exceeds the allowable temperature according to the standards, it is provided either dilution with atmospheric air or, optionally, a heat recovery unit.

The main advantage of the IPEC process is its continuity. The pyrolysis technology supplemented with a catalytic unit is the most promising thermal technology of plastic waste disposal available today. It has only one important requirement – the urgent need to seal the reactor and strict insulation of the process from the environment. The penetration of atmospheric air into the process immediately leads to an emergency situation. Fortunately, IPEC has long known how to secure equipment and personnel, the trouble-free operation of TDP-2 has been confirmed by many customers.

When using the material/any part of it, a reference to authorship and a website (www.i-pec.ru/en) is required.