The Great Pacific Garbage Patch – “food” for the TDP-2 Unit or how the mobile solution of ST CJSC will meet the challenge of plastic pollution of the World Ocean!

International power ecology company / Useful information / The Great Pacific Garbage Patch – “food” for the TDP-2 Unit or how the mobile solution of ST CJSC will meet the challenge of plastic pollution of the World Ocean!

The world ocean is a cradle of the humankind. The life and everything included in this concept was born in it. The area of these “amniotic waters” is 361.1 km², i.e. 70% of the Earth’s surface, and its volume is 1340.74 million km³. This resource of amazing and so necessary to mankind substance – water – seems eternal and inexhaustible.

However, the ingratitude of a man knows no limits. In its pursuit of convenience and benefit man has gone far in the process of polluting the World’s oceans. And if earlier the word combination “Bali Island” evoked memories of wonderful sand and gentle waves, now it is associated with an incredible amount of plastic trash that dotted its popular beaches. The biggest problem, however, lies out in the sea.

Every second, for example, as you read this article, about 300 kilograms of trash enter the world’s oceans, and by 2050, if the pace continues, there will be more plastic waste in Earth’s waters than fish. Due to a combination of currents, all the waste thoughtlessly thrown into the ocean is not distributed evenly over its area and volume, but accumulates in five places. 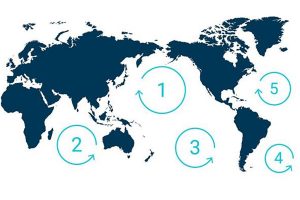 Of these, the Great Pacific Garbage Patch (number 1 in the picture) is the world’s largest garbage dump on water, the size of which is staggering. It covers 1.6 million (1) square kilometers, equal to three Frances. The slick is subject to seasonal and annual fluctuations, but its location remains roughly at the intersection of 32° north latitude and 145° west longitude, northeast of the Hawaiian archipelago. It is completely impossible to accurately estimate the amount of plastic waste that forms the Patch, as it is not only located at the surface, but by because of the destruction process it submerges into the blue, although the bulk of it is distributed within a few meters under surface.

According to a study performed with the help of 30 ships and aerial photography, the approximate amount of debris in the Great Pacific Patch exceeds 80,000 tons. 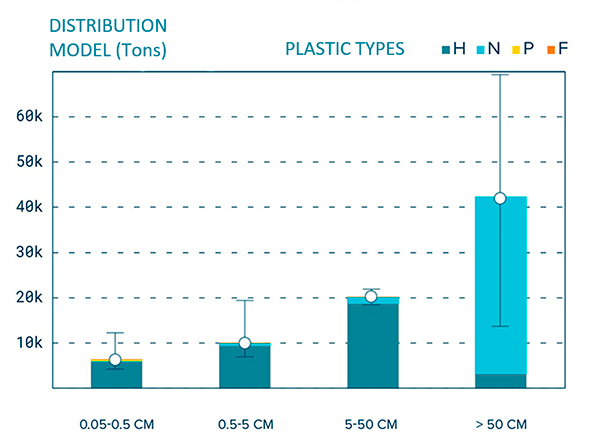 The plastic inside the Patch was divided into four classes by size:

Although microplastics lead quantitatively, 92% of the waste mass in the Patch is made up of particles larger than 5 mm.

The concentration of plastic waste in the center of the Patch is more than 100 kg/km2, at the edges it can drop to 10.

So what technologies have mankind come up with to deal with the Great Pacific garbage patch challenge?

Surprisingly, the cumulative amount of efforts is not that great. No, it’s not that no one cares, but apparently, due to the fact that plastic accumulates mostly in neutral waters, the funding of the processes addressed to the elimination of the Patch or at least to limiting its spread is minimal. Meanwhile, shredded, frayed plastic debris has a devastating effect on all marine life. Often retaining their bright color, they end up in the digestive systems of marine creatures, leading to the death of the birds and animals themselves and their offspring. Small particles of degraded plastic float just below the surface of the water, exceeding the amount of plankton – the main food of many marine species – by a factor of 6.  There are frequent cases of strangulation of marine animals by plastic waste.

Of the active attempts to do something about it is the System 001, which is an ocean cleaning system developed by the Dutch company The Ocean Cleanup, a kind of barrier that limits the spread of plastic. By design, it was a self-directed U-shaped system, functioning with the help of natural factors, which collects plastic inside by itself and does not allow it to leave the pollution zone. But still its performance has been criticized. A second modification (System 002) is now being developed as part of the project, but the completion of the works is far ahead still.

At the same time, there are already technologies that can solve the problem of marine plastic. After all, the utilization of plastic waste on land is pretty well developed. The quality of plastic, which has been in the water for a long time, of course, will not allow the implementation of recycling technologies, but for omnivorous thermal technologies it will not come as a serious challenge.

The proposed (even evident) solution to this challenge  is a continuous pyrolysis unit TDP-2. The essence of the pyrolysis process consists in heating the feedstock in an oxygen-deficient atmosphere and subsequent evaporation, cracking and condensation of hydrocarbon compounds. Not all types of waste can be recycled by the pyrolysis method, but plastics waste is suited to the pyrolysis process in the best way possible, with the formation of a maximum useful product and minimum waste in the process. The useful product in case of plastic recycling is pyrolysis fuel, which is used to maintain the temperature of the process. 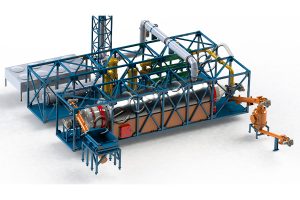 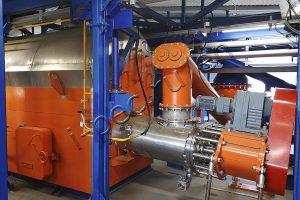 Due to the high calorific value of the plastic wastes the unit will quickly reach the operation self-sustained mode  and then the plastic wastes will recycle themselves. This just puts pyrolysis unit TDP-2 out of competition in economic efficiency. There is even enough fuel for electric power generation, and it will not be superfluous on the ship. The tandem of the TDP-2 and the Capstone turbine has already been successfully tested, and the generator produced its maximum capacity during the tests.

After sorting and shredding (or bypassing this stage, if it is not necessary) the waste is fed to the pyrolysis reactor via a system of sealed screw feeders and moved further along the heating chamber. After the drying stage the thermal destruction stage begins, the plastic waste begins to melt and evaporate. Passing through the filtration system the gases are cleaned from soot and are directed to the condenser, from which the condensed pyrolysis fuel drains to storage tanks. The furnace flue gas is discharged into the atmosphere through the gas cleaning system. The carbon residue is also discharged from the reactor by the sealed screw conveyor and is cooled in the sealed ash collector. It is a waste product, but in the case of plastics as feedstock, with a little conditioning, the carbon residue is converted into conditioned technical carbon, suitable, for example, for the manufacture of rubber products.

Transportation issue: waste to the unit or the unit to the waste – this question in case of TDP-2 is solved unambiguously. The equipment in its most extended version is mounted in standard 40-foot shipping containers, and its placement on any vessel, even a small tonnage, is not difficult. The unit has proven to be excellent on land, and will of course need modifications for sea conditions, especially stormy ones, as the nature of the Pacific Ocean does not do justice to its name at all.  On the other hand, due to dissipation by sea winds, the already environmentally friendly installation will cause a minimum of questions regarding the environmental load on the atmosphere.

Preliminarily the whole operation can be divided into phases: first the coarse fraction (macro- and megaplastics) is lifted by trawling, then crushed and recycled.  After that fine particles are separated by filtration, and also are sent for processing. It is also necessary to provide a biostation for working with living organisms, captured by trawls and filters. And, of course, one of the tasks is to solve many related issues, none of which, however, are insoluble already at this stage of technology development.

Safe Technologies Industrial Group has experience in working with marine equipment. Marine incinerators produced by IG ST are certified by RMRS (Russian Sea Registry) and Marpol and are installed on both military and civilian ships. Thermal operation units operating in open sea conditions are not a new experience for the company.

Article “Great Pacific garbage patch – “food” for TDP-2 Installation or how mobile solution of ST CJSC will meet the challenge of plastic pollution of the World Ocean!” was  published in “Ecoeng” journal, issue №20, 2021.

When using the material/any part of it the link to the authorship and the website (www.i-pec.ru/en) is obligatory.

Materials from the below websites were used to prepare this article: